The Minnesota Landscape Arboretum, a top visitor attraction, contains more than 1,200 acres of gardens and tree collections, prairie and woods and miles of trails. As a premier northern garden, the Arboretum was borne out of the University of Minnesota Horticultural Research Center and established in 1958, with the Men's Garden Club of Minneapolis, Lake Minnetonka Garden Club, Minnesota State Horticultural Society and other community supporters creating the Arboretum as a gift to the University of Minnesota. Anne's family picks there top 10 Things For Kids at the Landscape Arboretum. Online Fun From the Arboretum

Kids can visit the Children at the Arb web page to find FREE activities to do at home, including coloring pages, weekly nature crafts and story times on Thursdays, weekly PlantMaker Studio at Home activities, as well as activity kits families can purchase.

The Arboretum offers some of the BEST Free coloring pages!

Two of my favorites are the Flora & Fauna Coloring Pages and the Botanical Coloring Pages. Small kids, who may not be ready to draw on their own, can start their own botanical notebooks with these coloring pages.

Newly added are the Seed Packet Coloring Pages, which would be great for making your own garden markers for seeds you are starting indoors. You could also use the envelopes the seeds come in, but these are pretty and vintage and give your kids a fun extra activity.

Kid-Friendly Fun at the Arb

The AppleHouse opens in the fall when apples ripen through December.  Families can buy fresh apples, cider, pies and mini donuts.

StoryTime at the Minnesota Landscape Arboretum

The arboretum's Andersen Horticultural Library host's StoryTime on Thursday mornings at 10:30. Stories will reflect the seasons and nature. Arboretum admission is charged for these events. If this will be a regular activity for your family, you may want to consider a membership for the adults and teens (16+) in your house. $100/year covers two adults. Pods for Preschool Program at the Minnesota Landscape Arboretum

The arboretum offers a Tuesday morning parent/child preschool program. Sessions run for 10 weeks and are $120 members/$140 non-members. These programs have limited spaces.  Each week kids will participate in activities such as planting, art, sensory and science, discovery zones, action and music, story time, Green Play Yard adventures, greenhouse exploration and snack. Parents should plan to participate with their child. Non-participating siblings can attend for free, but each participating child must be registered. Learn more here. Whether you home-school or not, families can participate in Homeschool Days (although you'll have to pull the kids out of school if you don't home-school). Registration costs $10.00 for individual students with discounts for members. However, these events are always held on 3rd Mondays, so gate admission is waived. These educational enrichment experiences include hands-on interactive science. Classes can be registered for individually. Please pre-register. 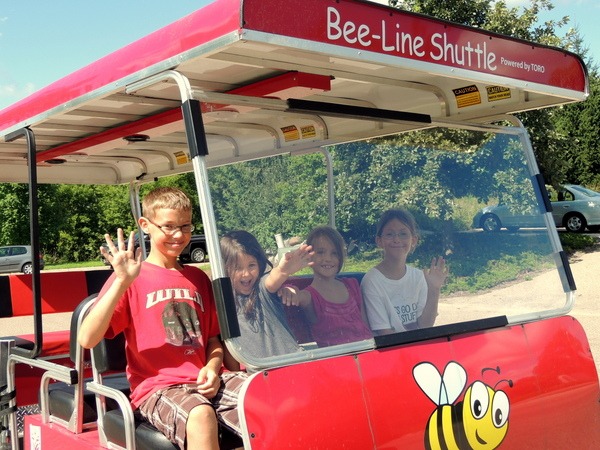 The Arboretum posts its summer programs in mid-December and they open for registration in early January. Learn more about summer programs here. Camps are offered for the following age categories:

Membership. Remember that kids (15 and under) are always free, so you don't need a family membership.

Beginning in July of 2021, bicyclists and walkers can bike through the arboretum and can purchase admission with a smart phone. Bicyclist/pedestrian admission is $12 for non members. This bike path connects to the Highway 5 Regional Bike Trail. Learn more here. Download a PDF map of the Arboretum grounds or use this cool interactive map that let's you know what's in bloom during your visit so you can plan your walks accordingly.

History of the Minnesota Landscape Arboretum

The following information was written by Heidi Gould and has been reprinted courtesy of MNopedia under a Creative Commons License and may be reprinted under the same license.
The University of Minnesota Landscape Arboretum is the state's largest, most diverse and complete horticultural site. The grounds have more than five thousand types of plants, including fruits, vegetables, bushes and flowers. Located about twenty miles west of the Twin Cities, it is a significant horticultural resource.

The history of the Landscape Arboretum begins with Peter Miller Gideon. He established a homestead and apple orchard on the shores of Lake Minnetonka in 1853. The orchard started with thirty apple varieties, but the harsh Minnesota winters and hot summers killed most of them.

By his tenth year on the farm, in 1868, only one seedling survived. However, Gideon was determined. He sent his last eight dollars to Maine for more seeds. Gideon crossed the large apple seeds he received with a hardy local crab apple to create a new apple, the "Wealthy". This fruit survived Minnesota's extreme weather, and was the foundation for apple growing in Minnesota. The Wealthy's success led to the Minnesota State Legislature's approval of state-funded experimentation in breeding new fruit varieties.

In March 1878, the Minnesota State Horticultural Society, using state funds, started the Minnetonka Fruit Farm on 116 acres next to Gideon's farm. Gideon was in charge of the fruit farm until his retirement in 1889. That farm was then sold, but new research opportunities were available. In 1883, the Minnesota State Horticultural Society established a series of research stations. These stations were for creation and testing of other new varieties of fruits and vegetables.

In 1907, the Horticultural Society successfully petitioned for a new fruit breeding and testing farm to be part of the University of Minnesota's Horticulture Department. The farm began on seventy-eight acres purchased five miles west of Excelsior. More land was bought in 1920 and 1931, for a total of 230 acres. Planting began with extra seeds and plants from the experiment stations and donations by farmers. By 1912, sixty-five acres were planted and thriving on the Fruit Breeding Farm.

The first new fruit variety, the Latham raspberry, was introduced by 1914. By 1923, twenty-nine new varieties were being enjoyed. Despite this early success, the farm faced yearly money and weather problems. Droughts, floods and extreme cold or heat caused problems for plants. Money problems were addressed by using Works Progress Administration workers during the Depression in the 1930s. The farm also collaborated with the U.S. Department of Agriculture (USDA) and the National Fruit Breeding Program in 1938. This partnership brought USDA field agents to work on the farm and money to pay for their labor part-time.

The Fruit Breeding Farm continued to grow and produce new hardier fruit varieties. Between 1919 and 1953, sixty-two new varieties came out. Among the better known were the "Fireside" and "Haralson" apples, the "Northstar" cherry, and the "Superior" plum. The "Haralson" was very successful. It has provided more income than any other Minnesota apple variety. In 2005 Haralsons made up over fifty percent of all Minnesota apple production.

The farm had many leaders over the years. Between 1953 and 1970, Dr. Leon C. Snyder was in charge. He was interested in planting for landscapes. He first planted shrubs and trees around his home on the farm, and then later planted in the farm's open fields. In 1954, Snyder started the Woody Landscape Breeding Program. Over 600 varieties of trees and shrubs were planted by 1955.

Snyder dreamed of an outdoor laboratory to create new plants and an outdoor living classroom for students. Soon after, in 1958, land was purchased by the University of Minnesota for a Landscape Arboretum. In 1967, the Fruit Breeding Farm became the Horticultural Research Center (HRC), growing more than just fruit. In 1987, the HRC and the Minnesota Landscape Arboretum were merged administratively as one program, or department, by the University of Minnesota.