It all started one day when Elsa decided she needed a bath. As a parent of a little girl, YouTube is the bane of my existence. This particular tragedy began with a nasally-nosed YouTuber showing my 7-year-old how to make a bubble bath out of Poly-fil Stuffing. Ms. Seven then decided to gut her 16-year-old sister’s beloved Build-a-Bear, Rainbow Bear, to get the necessary stuffing. How do you restore Build-A-Bear? We found that there are several options for Build-a-Bear Repair, and they are all quite affordable.

Build-A-Bear Will Fix Your Bear in Store for FREE

Build-a-Bear will restuff a stuffed animal that has come unstuffed. I read this in an online forum and was skeptical. The commenter suggested it is best to go during a slow time. The Twin Cities has two Build-a-Bear locations – Rosedale Mall and Mall of America. As the Mall of America rarely has slow times, I decided to go to Rosedale. In order to avoid crowds, I took off work on a Friday when my kids had off of school, but Roseville schools were in session. Unfortunately, life got in the way and we didn’t make it to Build-a-Bear until Saturday around 10am — the absolute worst time to go to the mall.

I went in with every expectation that I would be sent away or asked to come back another day. Instead, we were greeted by a bear builder who immediately said she could help. She looked over our bear and said, “I’ll just go sew up some of these holes before we start.” 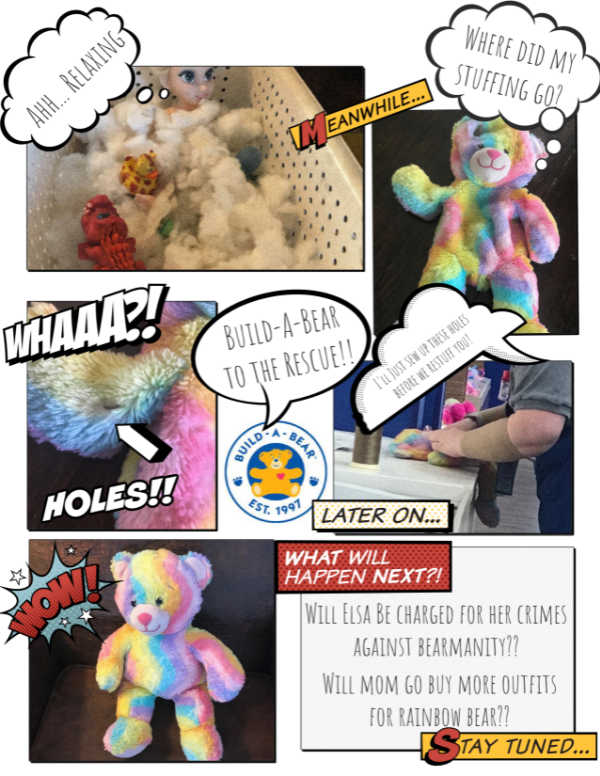 Rainbow is about 10 years old and has a bit of wear and tear. Her heartbeat sound had stopped years ago. While Rainbow got stitched up, we looked over the options for a new sound chip. There were a LOT of options. While Ms. Seven wanted to add the sound of Elsa singing Into the Unknown, we decided it would be best for her long-term health if she didn’t make Ms. Sixteen any angrier about this incident than she already was. We wisely decided to stick with the heartbeat.

Next We Got New Stuffing for Rainbow Bear

Of course, watching the stuffing is the fun part, and they did this for FREE. In case you haven’t seen a bear stuffed at Build-a-Bear, we made a video of Rainbow’s experience:

As I mentioned above, the repair services and re-stuffing were complimentary. I can’t begin to tell you how impressed I was that they cheerfully helped us with this repair in the middle of a busy Saturday morning. Free is nice and cheerful service is nicer.

As with all things at Build-A-Bear, you can always get addons. A simple heartbeat cost us $4.00. We could have add a personalized message for $8.00. To add the voices of Elsa or Anna singing is $8.50. All other sounds fall somewhere between $4-$8.00. You can preview sounds here.

We could have also added a scent — like Fresh Cut Flowers, Berry, or Girl Scouts Thin Mints — for an additional $3.50-$4.00. Find bear scents here.

Ms. Seven, spent our visit fawning over all the clothing and accessories. I promised we’d come back another time when she had some allowance money to spend. 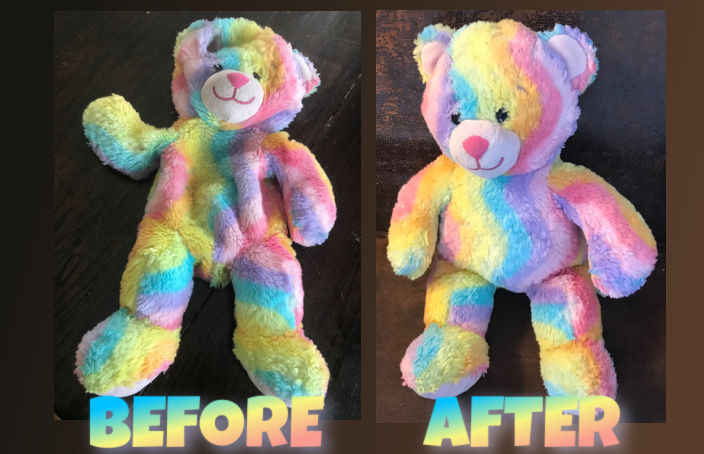 The Bear Hospital for a Complete Overhaul

Before Rainbow’s unfortunate run-in with Elsa, she had been well-loved but also well cared for. Our sales associate was able to stitch up a few worn spots with a needle and thread, so Rainbow was strong enough to be re-stuffed. If she had been matted or dirty, I would have tossed her in the washing machine while the stuffing was out, but I didn’t need to do that.

If you have a bear that is a little beyond a few stitches and a re-stuffing, Build-a-Bear has a Bear Hospital. You can get help from Dr. Robin or Dr. Maria if your “real furry friend” gets ahold of your stuffy and does what pups do to stuffed bears. Learn more about the official Bear MDs here. Find customer service help online, by phone at1-877-789-2327, or email Guest.Services@buildabear.com.

How to Fix and Care For a Teddy Bear at Home

Can Build-A-Bear come to your home for repairs? No. Luckily, stuffy repair is actually pretty simple and inexpensive, if you can’t easily get to a Build-A-Bear Workshop store.

Remember to start your needle on the inside of the seam opening to hide your knot. Use a matching thread, if possible. If you have basic stitching skills, you won’t need a tutorial, but here is a stuffy mending demonstration from Sew Geek Mama if you need it.

For a bigger hole, I have had pretty good luck darning vintage bears. This would likely work well on a modern bear, too.

According to Build-A-Bear’s Care and Cleaning instructions, you do not need to unstuff your bear to clean it. You can just put it in a pillow case and toss it in the washing machine. However, if you have a working sound box, you’ll want to remove it or have it removed at a Build-A-Bear Workshop. For spot cleaning, Build-A-Bear sells Bear Stuff Cleaner.

As long as we were at Build-A-Bear Workshop, we decided to buy a gift-card for a birthday party Ms. Seven was attending later in the day.  This turned out to be a great idea because: 1) All kids dream of going to Build-A-Bear; 2) If birthday kids sign up for the Build-A-Bear Bonus Club and use the gift card during the month of their birthday, they can take advantage of the Pay-Your-Age promotion; 3) After our purchase we qualified for an additional $10 gift card for half price, so our birthday friend got a little extra. (This is a limited-time offer and I’m not sure when it ends.)

How much is a stuffed animal at build a bear?

Basic bears start at $14.00. These include the bears that Bonus Club members get for the pay-your-age deal. If you sign up your kid for the Bonus Club before their first birthday, you could get a bear for as little as $1.00. Call ahead for this deal, because sometimes stores run out.

However, if your child has their heart set on Grogu from the Mandalorian, prices start at $44.00. Accessories are another place you have to watch yourself; they have a way of running up the price.

At the end of the day and for just a few dollars, we had a beautifully re-stuffed Rainbow Bear, whose heart beat for the first time in years. Ms. Sixteen can keep this bear for her own kids. I’m sure we’ll be back when Ms. Seven becomes Ms. Eight, because I did sign her up for the Bonus Club. Then, we will spend a great deal more money (because she is that child who has her heart set on Grogu. But, who can say “No” to a birthday kid at Build-A-Bear?)

If you have a Build-a-Bear Repair story, leave us a comment. We would love to know who it goes.