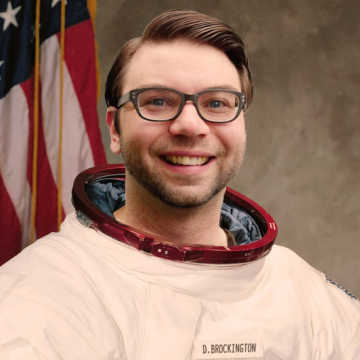 Drew Brockington is a Minneapolis author best known for the CatStronauts series. Drew may be the only local kids author to have flown a Space Shuttle, repaired the International Space Station, and served in Mission Control (during a week at Space Camp). Besides CatStronauts he has written DC Comics’ middle-grade graphic novel, Metropolis Grove and the picture book Hangry.

Drew Brockington’s books are available through our Bookshop store and include the following titles.  If you purchase books through our link, not only do we get a small commission, but 10% of regular sales on Bookshop.org are added to an earnings pool that is evenly divided and distributed to independent bookstores every six months.

Let’s Do Fun Stuff Together

Drew shares stories and crafts inspired by his favorite CatStronauts character, Waffles. The CatStronaut joins him in puppet form, in his YouTube drawing show, “Let’s Do Fun Stuff Together.”  Each of videos is approximately half an hour. For kids who love his books or want to learn to draw alongside a real graphic novelist, they are really fun to watch. I wrote this entire entry with a split screen, so my kids could continue to watch the videos after I checked them out.

There are several unlicensed astronaut toys out there. A friend of ours bought one in Japan last year. Licensed toys are hard to find. Drew had a limited edition Waffles Plush on his Brockart Web Store (but they are currently sold out).

If you want to meat Waffles, he accompanies Drew on in-person visits to schools and bookshops.