This article is a story of Gianna’s experience at The Bakken in 2015. While the museum is constantly evolving and offerings change regularly, this narrative shares the energy we consistently find at the Bakken any time we visit. Your visit may differ in the details but the atmosphere of discovery remains constant. Please visit our directory for up-to-date information.

An Aquatennial Visit to the Bakken Museum

Chris was off, Tori had an appointment in South Minneapolis, and The Bakken Museum was free during Aquatennial. They called it the 10 Best Days of the Bakken. And it was a perfect family day. I highly recommend The Bakken.  And let me tell you why.

The Bakken Museum was founded by a man named Earl Bakken (he’s pretty ingenious, huh? Naming his museum after himself and all.) Actually, he is extremely ingenious. He started the Medtronic company which is one of the leading medical device companies in the world based right here in the Twin Cities.  If you know someone who has a pacemaker or other heart devices, there is a pretty good chance that Medtronic developed it. And if the engineers at Medtronic didn’t develop that particular device, they still pioneered the advancement of medical technology.

But enough about me defending Medtronic’s existence, I really don’t need to be doing that.  What I do need to tell you is about The Bakken Museum. The Bakken Museum explores the history of electricity and the wonders of magnetism. It is located in a large mansion called West Winds on the shore of Lake Calhoun with different rooms here and there and everywhere. You never know when you will run into a set of stairs.

The exhibits are both inside the museum and outside in the gardens.  You can learn about the West Winds Mansion itself, the gardens, the history of electricity in Minnesota, electricity in our own bodies, Benjamin Franklin’s electricity discovery. You can also experience libraries and art. The spookiest part of the museum is Frankenstein’s Laboratory. Sir (who is 4) was so  freaked out by this little eerie tucked away room in the mansion, that he wouldn’t even walk by it. Exploring the gardens, we found them full of herbs and plants used for medicinal uses. Tori was excited to do the activity planned in the Green Energy Art Garden, but because it was pouring rain, they didn’t hold this event.  Even though she was a bit disappointed, she was excited to play with this thing.  Whatever it was.  We couldn’t figure it out.  Do you know? 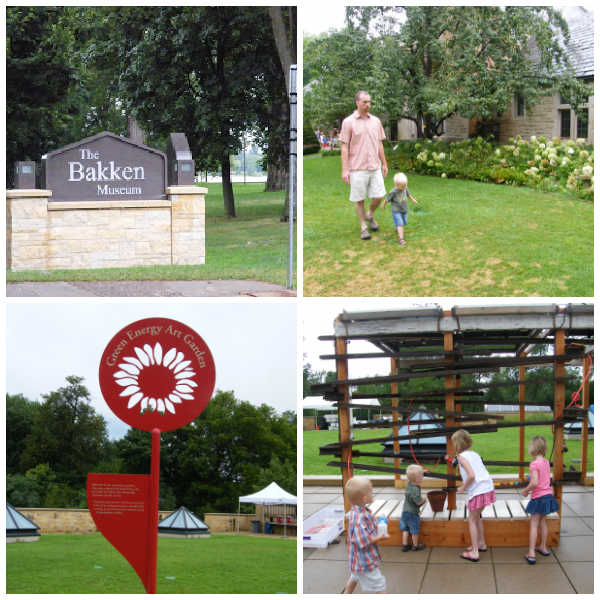 And this is where I tell you the story that stuck with me the most.

And it’s all thanks to this little girl!  Kyla. Before I knew what was happening, Chris was heading upstairs with the three oldest. So I followed along behind with Jack. The show was starting by the time we made it up there (since it was very important for him to climb the stairs himself), so we sat down in front of the other three.

What was I thinking?  I looked around and realized that some people were snacking on something.  And being the mother that I am, I did a 1/2 second surveillance of the perimeter and discovered the source of the said snack.  I sneaked quietly into the adjoining room–the snack room–and loaded up on snacks. When you have 4 children, you look like a glutton.

You don’t believe me?

Then, I challenge you to take 4 bags of popcorn and 2 juice boxes and 2 water bottles without explaining how many children you have.

Take the challenge!  I dare you.

Moving on. After noisily settling everyone in (while the show was progressing), we finally were able to take a breath.  And watched 2 hysterical ladies portray the masculine history of AEDs (Automatic External Defibrillators–or something like that). At times they would ask for volunteers and each time Kyla would throw her hand up as HIGH as she could.  She is such her mother’s daughter such an excited and willing participant.

3 minutes into the show, Chris found it necessary to remove Sir. So he took Dash out of the Great Hall, leaving Jack calling behind him. (noisy, I tell you!) I left the girls and brought the littlest one to his daddy and climbed back up the stairs to join the girls.

About this time, they were asking for a brave volunteer again. And once again Sweet Girl was not chosen. I patted her arm and said all the niceties you are supposed to say to a repeatedly dejected little 7 year old.  When the child was done volunteering, they then asked for an adult volunteer.

I looked at my sweet daughter and thought, “She would love to see me volunteer.” And suddenly my arm was up.

And they picked me.

Oh, yea!  Kyla will be so excited, I thought.

With trepidation, I walked the 15 steps to the front of the Great Hall.  They asked me to put my foot on the table and to rest my arm on my knee. The sweet lady–or so I thought– placed 2 sticky gray squares on my arm.  I was told to relax my hand.

I did.  Because I had full faith in these ladies.

They turned on a small device that caused my hand to flinch up.

It didn’t hurt, but it was quite uncomfortable.

without me really understanding what was happening, that sweet lady I told you about?

Yeah, she cranked it as high as she could.

And the little volt of electricity was no long LITTLE!

Before I knew what was happening, I was shrieking.  In terror?  In pain?  In extreme dislike of the sweet lady?  I’m really not sure.

But my hand had contracted as far as it was humanly possible.  I was being controlled by a shock of electricity shooting through my BODY!

The other lady (who I will no longer call sweet: even though she didn’t send pulsating current through my arm–she still knew what was coming and didn’t warn me) candidly stated, “I do that exact same thing as Gianna.”

Well, isn’t that nice to know!

They asked me if I wanted to do it again.

The rest of the day, I walked around with a buzzy arm.

If you don’t want a buzzy arm, don’t raise your hand if you ever go to Shocking News About Your Heart at the Bakken.

And you want to know what is ironic?  They needed 4 more volunteers after my demonstration…And Kyla was picked to be an Atrium of the heart!

3 thoughts on “The Bakken Museum – Family Fun in Minneapolis”