Logan Park in Minneapolis has family-friendly amenities, including a playground, wading pool, recreation center and sports fields and courts.

Expect construction on the roof during the summer of 2018 between August and October. Minneapolis Parks are an affordable option to make your child’s birthday party special! MPRB offers use of park facilities to both individuals and groups for self-directed activities, like birthday parties. Contact the park for permit requirements and special use fees. MPRB is committed to making your child’s birthday a fun and memorable event in the parks. Contact Info: Heidi Miller; logan@minneapolisparks.org

Outside, the park has both a playground and a tot lot. In the summer Logan Park has a sports field areas, a basketball court, and a tennis court. 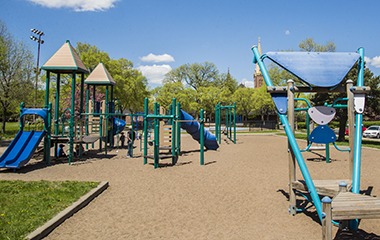 Logan Park is on a corner that includes busy Broadway Street. That could be a downside if you have a tot who is a runner. The traffic can also make it loud. We attended a Cromulent Shakespeare performance there one summer, and I found it difficult to hear the actors. The long awaited replacement of Logan's 45 year old pool began during the summer of 2018 and was finalized in 2019. The new pool is pictured below In the winter Logan Park offers an ice skating area with free loaner skates. These skates are on a first-come/first-served basis, but we have never had an issue finding the right sizes. They also have at least two hockey rinks set up. All rinks are kept up in very good condition.

The park is not too far from Spyhouse Coffee and several restaurants, including Broadway Pizza, making it a nice park to include in a combo-outing. 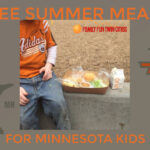 This park participates in the summer meals program, offering free lunch to children under 18 during summer break. The program runs from mid-June to mid-August.