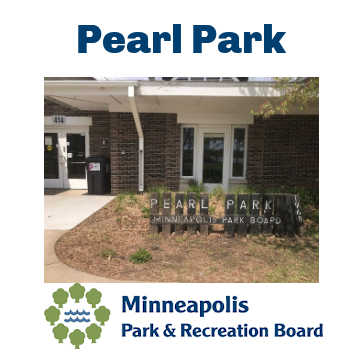 Pearl Park is mainly a sports park with several courts and fields. Other family-friendly amenities include a playground and tot lot, wading pool, walking path and a free bike pump. There is also space for picnics with restroom facilities and a drinking fountain. A paved path winds throughout the park, circling the baseball diamonds. It is not in good enough condition for smooth skateboarding or skating, but would be good for stroller walks or bike riding. Keep in mind that the breeze off of Diamond Lake makes this park a bit cooler than other places around town. It’s a good idea to toss a sweater or other layers into your car when visiting.

The two playgrounds are close together and benches are conveniently set up so you can watch both playgrounds at once. One thing to be aware of is that the playground area sits on the intersection of two busy roads — Diamond Lake Road and Portland Avenue — and across the street from Diamond Lake, so it may not be the best park if you have a fast runner. There is enough of a grassy buffer that you can probably tackle an average toddler before they got anywhere dangerous.

This park is not on a school site, so the pool is open from Memorial Day Weekend through Labor Day. Built in the late 1960s, it is one of the older pools in the park system, however, it was updated to meet safety standards. Minneapolis wading pools are unguarded and open from 10 am – 9 pm during the season, unless temperatures are still over 85 degrees at 6 pm, then they remain open until 10 pm. Pools do not open if the temperature is under 65 degrees.

The recreation center features a gym, a community kitchen, a craft room, and meeting and multi-purpose rooms. It is not air-conditioned.

This park is on an active flight pattern, so it is a great place to go to watch planes. You’ll see several descending planes during the course of an average visit. Rooms can be rented for private events like birthday parties. Contact MPRB for information on permit requirements and special use fees.

This park has both ice skating and hockey rinks. Rinks are usually open from late December to mid-February, depending on weather. Find more Minneapolis and greater Twin Cities outdoor rinks here: Skate the Twin Cities: Where To Find Free Outdoor Ice Rinks

While this is not one of Minneapolis Park’s sanctioned sledding parks, it does have gentle slopes that go into the park (as opposed to toward traffic). These could be good starter hills for small kids. MPRB recognizes sledding happens at non-designated parks and reminds users that it is “at your own risk” and and to use caution. Find a list of Twin Cities sledding hills here: Twin Cities Guide to the Best Sledding Hills. The park has a fenced off horseshoe pit area that my 9-year-old suggested would make a great snowball fight area. However, my husband pointed out that kids would need to be aware of where the stakes are so they don’t impale themselves. I’m definitely not endorsing this plan, but I do see the appeal. However, it did occur to me that it might be fun to bring a set of diving rings and play ring toss in the pits and then use the rings in the pool afterwards.

Updates to the Park:

The Minneapolis Park & Recreation Board (MPRB) plans to update the playground at Pearl Park to meet current safety and accessibility standards. MPRB released two preliminary concept designs for new playground equipment and surfacing based on community input. Construction is scheduled to begin July of 2022 and be completed in the fall. The playground will be closed during this time.