One of the top ten tourist attractions in the state, Mississippi Gorge Regional Park covers approximately 132 acres of land in the University of Minnesota area. It borders both the banks of the Mississippi River, starting near the 10th Avenue Bridge and ending at the north end of Minnehaha Regional Park. It consists mainly of biking and walking paths through hardwood forests located on steep fragile bluffs and flat bottom-lands.  It is a wild area in the middle of the City. 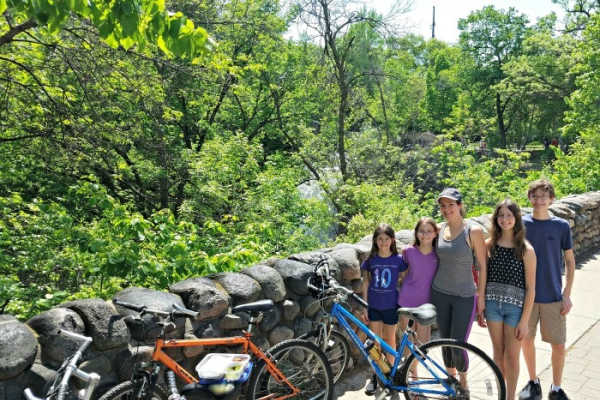 The parks on this side of the Mississippi are connected by a bike path along West River Parkway.

Bluff Street Park is slightly less than 6 acres along the river in Cedar-Riverside neighborhood. Its amenities include walking and biking paths through bedrock bluffs and prairie restoration areas.

Bohemian Flats continues the biking and walking paths that connect this regional park through the Seward neighborhood, but it can be a good destination or stop on your route because it also has garden and green areas as well as a picnic shelter and restrooms. You can launch your canoe or kayak from this park and even rent a storage rack. Some public boat cruises launch from this park. MPRB sometimes screens outdoor movies at this park location.

Of the smaller parks making up Mississippi Gorge Regional Park, Riverside Park is the only traditional park with a playground and other recreational amenities. These include and playground with tot lot, a wading pool, space to picnic with a grill and sports courts and fields. You will find drinking water and restrooms at this park. Riverside Park is nearly 30 acres and is located in Cedar Riverside neighborhood.

As its name indicates, Franklin Terrace Dog Park is an off-leash dog area located in Seward Neighborhood. In Minneapolis, permits are required to use dog parks. While the dog park is on the west side of West River Parkway, the bike path is on the east side of the road. Other than a place to exercise your dog, this park does not offer family-friendly amenities.

East River Flats is the portion of Mississippi Gorge Regional Park that runs through the University of Minnesota neighborhood on the east bank. Amenities include a picnic area and walking path. This park has restroom facilities.