Nature Reserves, like Hyland Lake Park Reserve, that focus on the woods and lakes and streams and meadows make me smile. Making up an adventure world full of princesses and ogres or rescue missions from the caves. Playing in nature is the best playground. However, there are times when you can’t replace the fun of a slide or a swing.  Again an adventure world can be be created across the bridges and ramps. That’s why we love Hyland Play Area.

The Three Rivers Park District offers many different experiences from nature trails and beaches to wooded shorelines and working farms. It offers live history and art.  It also offers playgrounds. And really good ones at that. In the month of August, we wanted to let you know about a few that we have experienced.

Located in West Bloomington is Hyland Lake Park Reserve of the Three Rivers Park District. Winding your way long East Bush Lake Road through a maze of lakes and wetlands, you end up ending the area affectionately called Chutes and Ladders. 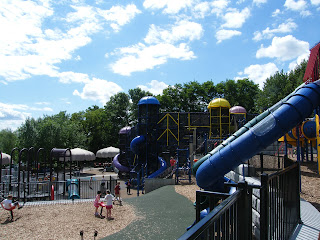 It is a gigantic play structure built up the side of a large hill full of climbing equipment, cargo nets, and slides: resembling the iconic board games Chutes and Ladders. This place is a hot spot for parents in the South Metro.  It’s just a few miles off 494 and fairly simple for anyone to find.  Even for me from the North Metro. 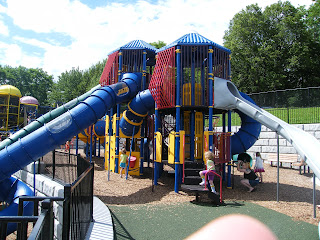 This was the original structure.  And while this is extremely fun (my kids played in this structure alone for over an hour), the added play areas give you so much more opportunity to play.

4 things to keep in mind about Hyland Play Area. 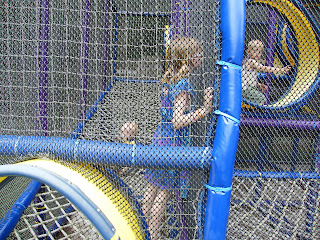 It doesn’t matter what age you are. This Hyland Play Area invites you to discover, explore, and simply play.